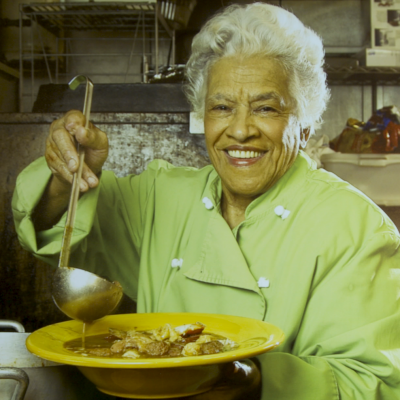 Kitchen Queens: New Orleans is dedicated to culinary pioneer Leah Chase who died in 2019 at the age of 96. Leah was raised in Madisonville, Louisiana, on the north shore of Lake Pontchartrain, coming to New Orleans at the age of 12 to attend Catholic high school. She met and married Edgar “Dooky” Chase, Jr., in 1946 and began working in the kitchen of the Treme neighborhood restaurant owned by his father Edgar “Dooky” Chase, Sr., and mother, Emily. For seven decades Leah was head chef and matriarch of the culturally significant New Orleans restaurant. Known as the Queen of Creole Cuisine, her work in the culinary arts and as an activist led to countless awards including a James Beard Lifetime Achievement Award in 2016, the Freedom Foundation Award, the NAACP Human Understanding and A.P. Tureaud Awards, and the Weiss Award from the National Conference of Christians and Jews. Today her family, including daughter Stella Chase Reese, grandson Edgar “Dooky” Chase, IV, and niece Cleo Robinson carry on her legacy and her classic New Orleans fare at Dooky Chase’s Restaurant.