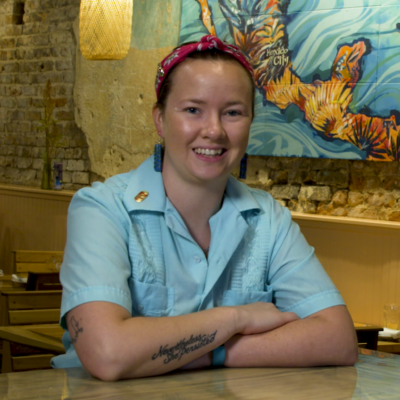 Established by Chef Amarys Herndon and her husband Jordan, Palm and Pine on North Rampart Street has a menu based on the southern states, the Caribbean, Mexico and Central America. Chef Amarys who hails from New Braunfels, Texas, moved to New Orleans when she was 19 and attended culinary school at Delgado Community College. Hired right out of school by Arnaud’s, she later spent seven years in the kitchen of Bayona and credits Chef Susan Spicer as one of her greatest influences. While they were working as sous chefs, Amarys and Jordan ran The Old Portage, a pop-up that helped the couple hone their “South and South of That” identity for Palm & Pine.